✅અહીં ક્લિકથી જોડાઓ વોટ્સેપગૃપમાં
અહીં ક્લિકથી જોડાઓ ટેલીગ્રામચેનલમાં
Universal Gujarat
Education News
The examination of the school inspectors will be held for the third time on July 13
The Department of Education, the Government of Gujarat, by its GR of 31-3-2010 (Annex-A) set up a Committee to re-draft the 1947 Gujarat (Bombay)Primary Education Act and the 1961 Gujarat Compulsory Primary Education Act, in line with and in line with the Free and Compulsory Education Act, 2009 (Rte Act) of the Government of India. The GR also required the Committee to draft laws and propose a procedure for implementing regulations on the admission of disadvantaged kids and the recognition of unaided colleges under the RtE Act. 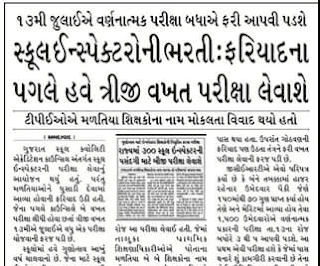 A few members were co-opted by the Committee and held several sessions.
The Committee held meetings in Ahmedabad, Surat, Vadodara, and Rajkot with educators, school managers, and association officials and benefited significantly from their views. In August 2010, the Committee presented a draft Gujarat Elementary Education Act to the government of the state. The Committee presented draft regulations on the admission of disadvantaged kids and the recognition of unaided colleges as required by the Department of Education in July 2010. In January 2011, a draft revised Gujarat Elementary Education Rules were presented.